Coast to coast and around the world, would be no fun, were it a guy and girl. 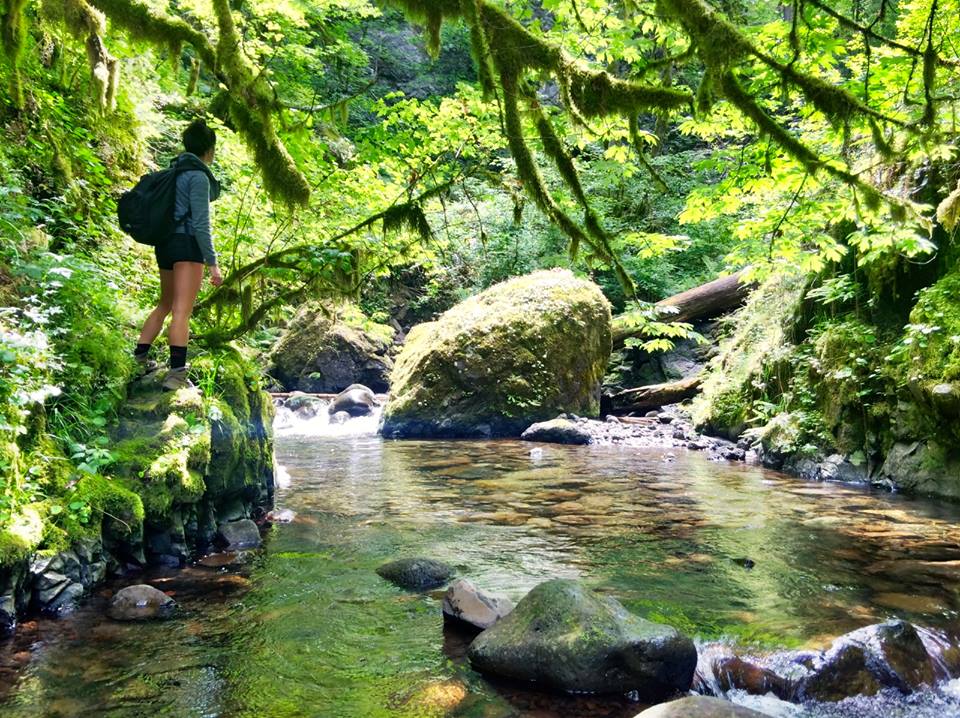 Hello travel enthusiasts & fans of me! Early Last spring 2016, a few friends, Whitney A & I took our first trip to Portland. The city & the surrounding environment was amazing. To be in a city setting circled by snow covered mountains in the distance is really a treat. 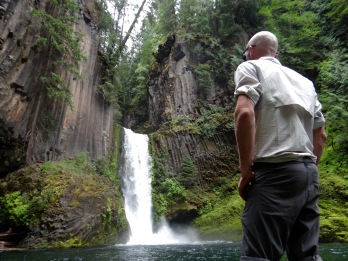 The trip started with a stop in Umpqua National Forest & a chance to see Toketee Falls. The couple mile hike is fairly easy & filled with great photo opportunities. May I recommend when you get to the falls, going against your better judgement & crawling under the overlook fence, climbing down to water level. It’s worth having the falls tower over you.  Afterwards, we hiked over to the Umpqua Hot Springs near our camp site. The drugs, naked flower children (hippies), & kumbaya were plentiful.

The next day we took a small trip up to Crater Lake for a little winter in spring experience. Disclaimer: for those who haven’t been to the Pacific Northwest, be prepared for all weather. I had never been before & did some calling around to ranger stations to get the scoop & was surprised to hear that I needed to pack winter gear in May.  In one hour we drove from 3,900 ft up to about 5,965 ft. When you get there, you drive up to the lodge which sits right in front of the lake. Not a bad view from a comfortable chair with a hot chocolate to warm you up. Any hiking you may want to do at this time of year is through high snow drifts, larger than I’d ever seen before & camping would be hard but not impossible, the park rents snow shoes by the day.

*Fun Fact: Crater Lake is set amidst a collapsed volcano also known as a caldera

Later that day on our way to Smith Rock State Park, we stopped off in Bend, a cool little hipster town in central Oregon. The main street is full of shopping, restaurants & breweries galore. We decided to stop at Deschutes Brewery & grab a bite & a beer. Right about that time I started getting a fever & tried to sleep it off in the car.

My buddies finished up dinner & we were off to Smith Rock. When we arrived we had to set up camp in the dark, which I don’t recommend.  Somehow this seems to happen to Whit & I a lot as we typically fly in in the morning day one & get wherever we’re going at night. The ground here is uneven & peppered with rocks which also makes it difficult to find a good comfy spot to sleep, hopefully you carry a sleeping pad. I went to sleep trying to fight off the fever & woke up to the sun coming up over the rocks, fever-less. 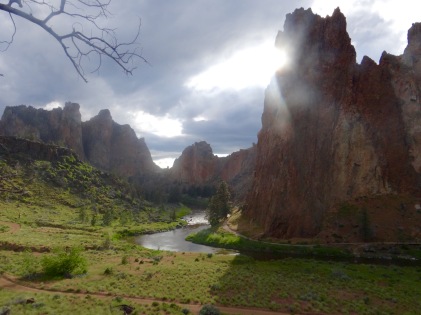 Dan, Matt, Mike & I hit the trails early, which I like because it’s nice to see nature with as little people as possible & it keeps the chances of unwanted photobombing down. Matt & Mike were moving quicker than Dan & I so we split the group in half, leaving Dan & I to do some climbing, a small photo shoot & a chance to get lost for about an hour on some private property outside the park. We were looking for the Misery Ridge Trail, a difficult but great hike to see everything the park has to offer. At the time I was a fairly new bald man & didn’t bring a hat, a mistake I came to regret much later when my Target brand organic sunscreen ended up breaking on the first use & inevitably leaving me to get sunburned. Hello peeling head. 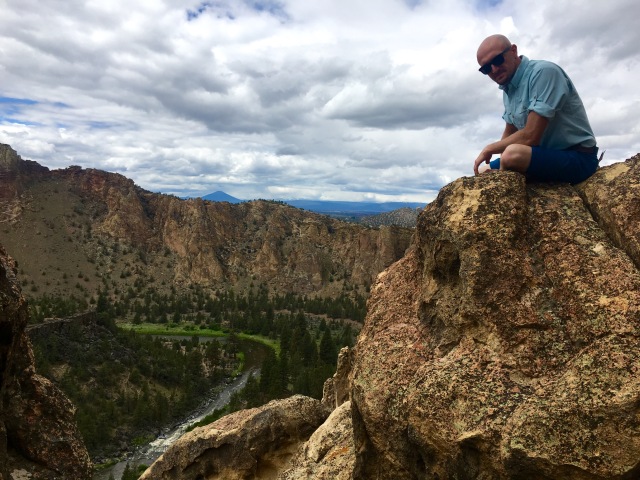 * An overlook on Misery Ridge

Mike & Matt split for the coast later in the day so Dan & I made back to Bend for one more night. We started over at Brother Jon’s Public House where he had ourselves their “Jack Sparrow,” a pulled pork sandwich with pineapple. It was just what my Sunburned fever filled head needed. Afterwards we spent the night in a one room Air BnB with great service, good rest & good water pressure. 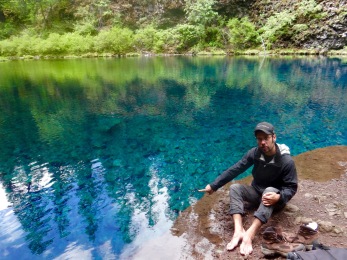 Our next venture was Willamette Forest, to see the Tamolitch Blue Pool. In case you weren’t sure how it’s pronounced, the locals say / Will-am-ette/. This is a little bit of a longer hike, very pretty but the trees seem to go on like Nebraska… forever. The end game is worth it. The pool was a clear dark blue in a little stone grotto all it’s own. We decided to reward ourselves with a little swim so we undressed down to our underoos & stepped into the water. “NOPE!” The water was so cold it hurt. So we hung around taking pictures for while until a girl & her dog climbed down to the pool to unintentionally shame us. They were impervious to cold obviously because they jumped right in & swam around. Hippies…

It was time to head back to Portland, Whitney A & Britney (Matt’s wife) were joining us for the second leg of the trip & had to be picked up. Close to the city, Dan & I stopped for Mexican food at this little madre & padre place. Was it good? Only Dan knows. I spent dinner puking in the bathroom multiple times & much later in a Target parking lot. My fever was back. I spent the rest of the night thinking “this could be the end. Who knew my life train ended in Portland?” 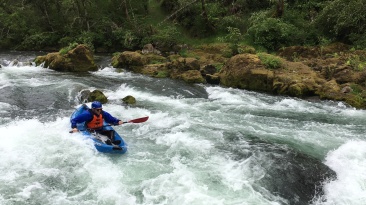 Cut to the next day… I feel great! My white knight immune system came to my rescue & our whole group was back together & we headed to eNRG Kayaking in Mill City to do some white water rafting down the Santiam River. Whitney & I were both first timers & I think we’d both agree these guys were great. Sam, as far as I know, the owner, arranged our meet months earlier & left us in the charge of one of his best guys who showed us a great time.

Afterwards, hungry & excited from our trip we stopped at Giovanni’s Mountain Pizza, which brags to have the best pizza in the country, no doubt we were skeptical, but for the low price & having just taking on a river in a plastic one man boat for the first time, they were pretty much right. It was great!

The last camping we did on our trip was at Opal Creek. A difficult find but a worth the frustration kind of place. It’s set among a type of kids exploration & environmental learning place. Almost like the Dunes in Indiana but way better. We camped overnight next to the river in a spot that felt like something out of “Fern Gulley.” In the morning we checked out the creek & its pool. So amazing. A place I can spend an entire day at & not get bored. 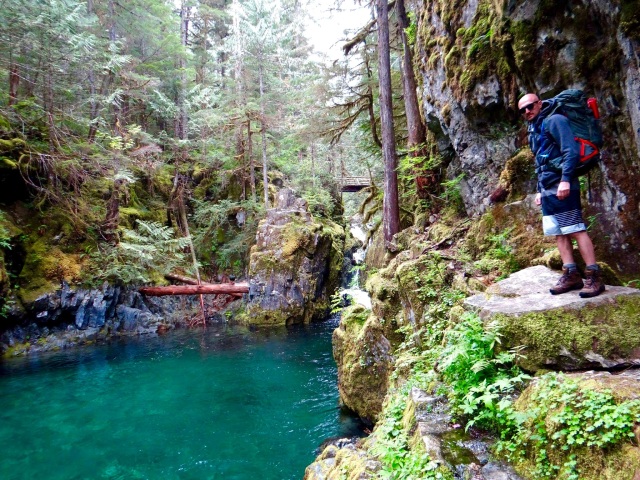 We made one last stop to check out Multnomah Falls, which sits on the Oregon side of the Columbia Gorge River.  I wish I could say I loved it, but it was more like a Disney Land attraction. No hike involved, full of kids & their parents out for the weekend. There’s plenty of other things I’d rather spend my time doing then wait in a line full of people taking selfies. Like sort by color, an economy size bag of M&M’s into separate bowls with chop sticks.

Back in Portland, we stayed in the Alberta Arts District, a cool little artist neighborhood, chock full of food trucks, restaurants, & bars.  Some of my favorite finds were  Cruzroom Tacos, Pine State Biscuits, & Por Que No Taqueria, all of which I’d strongly suggest to anyone. The three places that were my personal favorites were Hale Pele Tiki, & their fiery juice cocktails, the uncontested Pok Pok Thai, there is no better Thai anywhere, & finally McMenamin’s Kennedy School.

McMenamin’s, is a restauraunt/ entertainment group that re-purposes old structures & turns them into something else. In the Kennedy School, they took an old boarding school in a tiny Portland neighborhood & turned it into a hotel with four bars (which sell their own brand name cider, it’s delicious), a pool in the grotto, & a movie theater . Their hotel rooms are built in the old classrooms that to some degree retain the history & personality of their former selves. Please check this place out, it’s love at first, second, & so on sight. 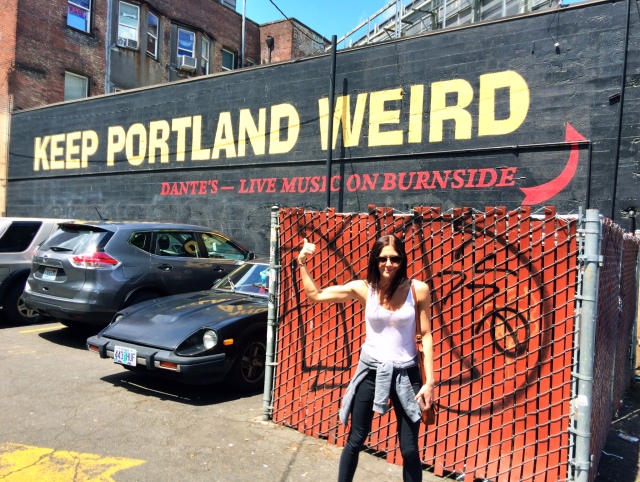 All & all a great first step to getting a feel for Oregon. We touched so little in eight days but it was the perfect sampler platter to get us craving to go back. It’s a fun & weird place & I’d urge you to plan well so you don’t miss anything while you’re there.

This site uses Akismet to reduce spam. Learn how your comment data is processed.